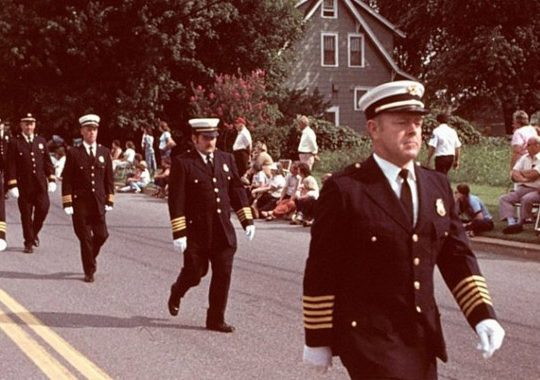 In the spring of 1985, Mergenthaler attended a meeting of the Keystone State Fire Chiefs Association as a guest of the late Earl Moser and then President Paul Lucas. At the meeting there was much discussion about the successes and challenges experienced by the PA fire service. Mergenthaler found the meeting very interesting and upon returning home, discussed how a wider group could benefit from the information exchange.

Lawrence raised the idea that the Cumberland Valley Volunteer Firemen’s Association (CVVFA) would be the perfect forum to host these discussions due the five-state participation in the Association, PA, DE, VA, WV, MD and DE.

The CVVFA agreed to host the inaugural meeting at the 84th CVVFA Convention held in McConnellsburg PA in August of 1985. The gathering became a regular part of the annual convention. Mergenthaler attended these meetings until failing heath prevented it in his later years. He was a huge CVVFA supporter.

His guidance in creating relationships with other fire service organizations outside Delaware resulted in the creation of the DVFA Out of State Coordinators committee tasked with keeping in regular contact with leadership of the various fire service organizations that interface with Delaware. He would travel nationally, always singing the praises of the Delaware Fire Service.

He joined the Mill Creek Fire Company in 1953 and was elected to the position of Fire Chief in 1976. He served as President of the New Castle County Volunteer Firefighter’s Association and the Delaware Volunteer Firefighters Association.  Lawrence was an active member of the Delmarva Volunteer Firemen’s Association. He was known for his charm, smart wit, wise remarks, and his big heart. Successful in business, Mergenthaler helped many members of the fire service in need with little fanfare. He never sought public recognition for his good works, most often done behind the scenes.

Lawrence had exceptional political skills and was the unpaid lobbyist for the DVFA in Dover for many years. He is credited with establishing a firefighter’s funeral expense benefit in Delaware among other legislation that directly benefited firefighters.

While he held his own political beliefs, he always maintained a strict non-partisan stance when working fire service issues. He had a long-standing rule about yard signs on his property during election seasons. Lawrence never cared what party the candidate belonged to. The only signs he would allow on his premises were from those politicians from either party, who had a record of supporting the fire service.

He was named to the Delmarva Firefighters Hall of Fame, the Delaware Firefighters Hall of Fame and was a Fireman of the Year for the DVFA. Lawrence was a collector of fire service memorabilia and was most proud of the complete restorations of Mill Creek’s 1940 American LaFrance JOX ladder truck that he purchased after being used by two other fire companies in Delaware after being sold by Mill Creek.

All services will be private. The Mill Creek Fire Company will announce a Memorial Service at a later date.