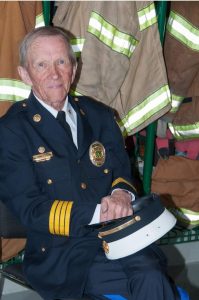 It is with deep regret that Mill Creek DE Fire Company announces the passing of Deputy Chief Emeritus John Fox. John had been battling failing health for several years.

John was a go-getter from the moment he joined Mill Creek in April of 1963, holding many positions within Mill Creek during his lifetime. He shaped many future officers within Mill Creek as an advisor to Explorer Post 921. He was elected Assistant Chief, Deputy Chief, Deputy Emeritus, Member of the Board of Directors and Company President three different times over his career.

John was the only person to have held the Presidency of the New Castle County Firefighters, Fire Chiefs and Fire Police Associations, recognizing his commitment to service.

John was elected President Emeritus of the Delaware Volunteer Firefighter’s Association, an honor bestowed on very few firefighters in the First State.

John’s memory will guide members of the fire service as an example of service and dedication.