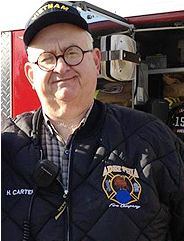 Dr. Harry R. Carter, Editor of Respondersafety.com and long time CVVFA member has been named to the Hall of Legends at the National Fire Heritage Center. Dr. Carter is a veteran chief fire officer, an internationally known municipal fire protection consultant, author, writer, and lecturer. He currently serves as a fire commissioner and is Chairman of the Board of Fire Commissioners for Fire District #2 in Howell Township, New Jersey. Dr. Carter has also served on the adjunct faculty of a number of community colleges in New Jersey, as well as the National Fire Academy in Emmitsburg, Maryland. He formerly served on the faculty of the School of Public Safety Leadership at Capella University in Minneapolis, Minnesota. He holds a Doctor of Philosophy from Capella, a Masters in Political Science from Rutgers University, a Bachelor’s degree in Fire Safety Administration from Jersey City State College, a Bachelor’s in Arts from Thomas A. Edison University, and an Associate Degree in Business Administration from Brookdale Community College. He retired in 1999 as a Suppression Division Battalion Commander with the Newark Fire Department in New Jersey. During his tenure in Newark, he served as Chief of Training, Commander of the Hazardous Materials Response Team, and Administrative Assistant to the Fire Chief. Dr. Carter is also a past Fire Chief and former Training Officer of the Adelphia Fire Company, located in the Adelphia section of Howell Township, New Jersey. He currently serves as the fire company Chaplain. He also serves as Chaplain for the East Freehold Fire Company in Freehold Township, New Jersey. Dr. Carter is a Fellow of the United States of America Branch of the Institution of Fire Engineers, Great Britain (FIFireE). Dr. Carter is currently serving as a Past President for the branch. He is a Life Member and former President of the International Society of Fire Service Instructors. Dr. Carter is also currently the President of the New Jersey State Association of Fire Districts and is a former President of the New Jersey Society of Fire Service Instructors. He is a Life Member of the National Fire Protection Association and has served on their technical committees since 1975. He has authored or co-authored twenty fire service texts as well as publishing more than 3,000 journal, magazine, and on-line articles and commentaries. From 1977 to 1981, he served as a member of the Joint Council of Fire Service Organizations.

Chief Joe Kroboth,1st VP of the CVVFA remarked, “Harry has been a pillar in our Association. We are fortunate he agreed to be our Editor for these many years. We are pleased that he received this prestigious honor”