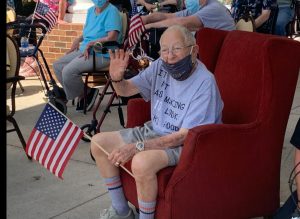 The oldest surviving member of the CVVFA has passed away. Fireman Kenneth K. Snavely who joined the Union Hose Company of Middletown, Dauphin County, Pennsylvania on July 5, 1938 died in Toledo Ohio on September 17, 2022 at the age of 105. Mr. Snavely joined the CVVFA in 1940 and was the last living member who joined in the 1940’s. He had lived in Ohio since 1965 and was a life member of the Association. Upon contact with him a few years ago he was surprised that he was still a member. During our first virtual convention in 2020 we featured his photograph holding an American flag in front of his residence during the annual 4th of July parade. To put his membership in to perspective, when Fireman Snavely joined the CVVFA, the Association was 39 years old. We are now in our 122nd year. Members like Ken Snavely built our Association. Their memories remain in our records and in our hearts.