Citizen participation in public affairs has been a basic element of American democracy throughout the history of the United States. The ideas and normative values of volunteerism 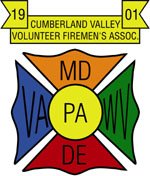 General Joseph F. Boyd was born October 4, 1832, in Marion, Ohio. At age 22, he became a freight and passenger agent of the Bellefontaine & Indiana Railroad, and later held the same position with the Louisville & Nashville Railroad.

During the Civil War he rose to the rank of Lieutenant Colonel and Chief Quartermaster of the 20th Corps. He was captured by Wheeler’s Cavalry after Chicamauga, but later escaped from Libby Prison by means of a tunnel. He was promoted to Colonel and Chief Quartermaster, and commanded the U.S. Military Railroad in that department. On being discharged, he breveted a brigadier general.

On July 1, 1873, the Cumberland Valley Railroad (CVRR), acquired a new superintendent, General Joseph F. Boyd. What has this to do with the Cumberland Valley Volunteer Firemen’s Association (CVVFA)? General Boyd brought many changes to the CVRR The CVRR, under General Boyd, was long active in the field of firefighting, both for its own benefit and that of the community.

The year of 1876 saw the beginning of a long term expansion of the railroads, Chambersburg shops, and around them a growing number of railroad workers’ homes.

With more fire protection needed in that area, the Cumberland Valley Hose Company was created on October 15, 1877, at the railroad’s urging. The Borough of Chambersburg supplied the company’s equipment, and the railroad a new firehouse on Second Street close to the railroad shop area. Railroad shopmen constituted the VOLUNTEER manpower, and George W. Nitterhouse, the railroad’s master car builder, was elected President of the fire company.

As early as the 1870’s, when one town in the valley had an especially large fire, it was the practice to telegraph for help to other valley towns, who loaded their apparatus on quickly made up CVRR trains and rushed to assist. But the strategy for mutual protection was frequently ineffective because the hose couplings on one town’s equipment would not fit another town’s fire equipment and hydrants due to the differences in the specifications of screw threads. Over the years, this situation resulted in some large and unnecessary fire losses. In 1901, there were 20 fire companies now served by the CVVFA.

Finally, in 1901, after an especially big fire loss in Shippensburg, CVRR Superintendent Boyd took action. Making a survey, he determined the specifications of all fire apparatus in the Cumberland Valley. Most of the thread size during that era was eight threads per inch (tpi). This was before the active beginning of the Society of American Engineers (SAE), and the National Fire Protection Association (NFPA).

Superintendent Boyd then obtained active support of Chambersburg Burgess, James A. Hamilton, who called a conference of burgesses of all valley towns between Harrisburg, PA, and

Winchester, VA. The result was the creation of the CVVFA, and the adoption of standard couplings or adaptors, fitted with what is known as the CV thread, 8 tpi.

The first meeting was held in Chambersburg, in the parlor of the Junior Hose & Fire Truck Company on North Second Street. The officers and the members who were in attendance for the various towns were as follows: President, James A. Hamilton, Chambersburg, PA; and Secretary, H. A. Logue, Chambersburg, PA; The towns represented were as follows: Harrisburg, Mechanicsburg, Carlisle, Newville, Shippensburg, Scotland, Waynesboro, Chambersburg, Mercersburg, and Greencastle, Pennsylvania; Hagerstown, Maryland; Martinsburg, West Virginia; and Winchester, Virginia. Thus was formed the CVVFA.

On the Fourth of July, 1902, the firemen of Winchester, Va, gave a firemen’s demonstration in that city at the request of Mr. James Haymaker and Mr. Robert L. Gray. These two men were at the meeting called in Chambersburg, PA, August 15, 1901, when all fire chiefs of the valley met there for the purpose of adopting a uniform coupling for all towns in the valley. The firemen of Winchester issued invitations to all fire companies in the valley to be present and organize what is now called the CVVFA. The territory which the Association covered at that time was 50 miles east and west of the CVRR; 50 miles south of Winchester, VA; and 50 miles north of Harrisburg, PA, making a territory 100 miles wide and 215 long.

A committee was also appointed to draft by-laws and a constitution. Martinsburg, WV, was selected as the meeting place for the second annual convention. During the many conventions of the CVVFA held over the years, in addition to adopting 8 tpi as a universal coupling for the Cumberland Valley, many persons of known character have been principle speakers. To list them all would make a long list, but to briefly mention their titles and places of employment are such as top fire marshals of all four states, editors of national fire magazines; leaders of universities and colleges; heads of national fire academies, and many leaders of industry whose concern is in fire protection.

In the 1950’s, the CVVFA, through the efforts of its public relations committee, sponsored the “SPARKY” program. This program was initiated by the NFPA of Boston, MA. This was made available to all fire companies in the Cumberland Valley and the four states of the Cumberland Valley (Pennsylvania, Maryland, West Virginia and Virginia). The booklet was prepared under the supervision of Chief John Brubaker, Middletown, PA, Fire Department; Assistant Fire Marshal J. C. Robertson of the State of Maryland; and Fire Marshal Robert Grant, Guilford County, NC.

Each fire department who accepted the Sparky Project established the age group for their respective departments. Middletown, PA, Fire Department and Keyser, WV, Fire Department won many prizes for their programs and activities involving Sparky in the Public Education Programs. As stated, the Public Relations Committee under the Chairmanship of Roy R. Allsop and Ralph Myers, Co-Chairman, introduced this program to many fire departments. The benefit of this program can be seen throughout the Cumberland Valley by the Volunteer membership who started as Sparkies.

The CVVFA is not a fire fighting organization. Its main purpose is ways to prevent fire, education of fire personnel, and keeping the fire service informed of legislation pertaining to fire service in the four states represented. Recently, fire companies from Delaware was elected into membership in the CVVFA and proposed a scholarship to be awarded to a worthy young firefighter. Like all new changes, many factors had to be worked out to initiate such a program.

The CVVFA announced its sponsorship of the Second Annual Conference of Mid-Atlantic Volunteer Firefighter Associations Presidents was held in Martinsburg, WV. This conference discussed mutual interest, especially legislation. This conference included participants from Pennsylvania, Maryland, Virginia, Delaware, and North Carolina. So, the CVVFA is ever making progress in the fire prevention field.

There were many individuals who could be mentioned, who were leaders–some strong and some not so strong–but all worthy men. One of this is C. L. Jacobs. He was never President, but was a main source of leadership to the CVVFA. He was elected Secretary at the Hagerstown Convention, held July 3, 4 and 5, 1917. These few words cannot express the love he had for the CVVFA. A large portion of his years of service can be seen in the firemen’s museum in Waynesboro, PA, at the A. T. H. & L. Fire Company on South Potomac Street.

At the CVVFA conventions, many events were staged to keep the firefighters keen in their roll as firefighters–hose reel races, steam pumper contests and ladder climbing races, and there were always the parades with drill and music contests.

An older member of the M.S.F.E. & H. Company of Waynesboro used to tell how they won many first prizes with their steamer. It seems they would take a small bottle of flammable liquid and hang it down the chimney. When the small fire was started in the fire box, the string would burn off and the flammable liquid would cause the wood fire to start quickly. It seems the judges never could prove the wood fire was started this way.

One brief note–through the efforts of the National Fire Protection Association (NFPA) in 1905 after the large Baltimore, Maryland, conflagration where Philadelphia and New York City hose would not fit all the hose from each city, the NFPA established standard hose connections. They adopted 7-1/2 TPI. However, most of the Cumberland Valley fire companies–mainly Chambersburg, Waynesboro, Hagerstown, Harrisburg, Martinsburg and Winchester–were using CVVFA 8 TPI.

Since its organization, the Association has continued to be active in the work for which it was formed. Important milestones in the history of the Cumberland Valley Volunteer Firemen’s Association are as follows:

The CVVFA has taken active roles in the state associations of its five member states. The CVVFA hosts biannually, in March and August, meetings of the presidents of these associations, proving an unmatched opportunity for the exchange of information and ideas to permit the members states to remain progressive and in the forefront of fire service issues nationwide.   For More CVVFA History Click Here and Scroll Down

Dr. Candice McDonald President of the CVVFA, signs the Crash Responder Safety Week Proclamation. The CVVFA
is a member of the FHWA Traffic Management Executive Leadership Group that is meeting in Washington DC. ... See MoreSee Less

Here's some good news! All CVVFA Members will receive a FREE Subscription to Fire News. Check out the details: cvvfa.org/cvvfa-members-to-receive-a-free-subscription-to-fire-news-another-great-membership-bene... ... See MoreSee Less

Pennsylvania Firefighters, do you know about the new Recruitment and Retention Programs available from the Office of the PA Fire Commissioner? Visit the CVVFA Web Page for more information
cvvfa.org/attention-cvvfa-members-from-pennsylvania-new-recruitment-and-retention-assistance/ ... See MoreSee Less

The oldest surviving member of the CVVFA has passed away. Fireman Kenneth K. Snavely who joined the Union Hose Company of Middletown, Dauphin County, Pennsylvania on July 5, 1938 died in Dayton Ohio on September 17, 2022 at the age of 105. Mr. Snavely joined the CVVFA in 1940 and was the last living member who joined in the 1940's. He had lived in Ohio since 1965 and was a life member of the Association. Upon contact with him a few years ago he was surprised that he was still a member. During our first virtual convention in 2020 we featured his photograph holding an American flag in front of his residence during the annual 4th of July parade. To put his membership into perspective, when Fireman Snavely joined the CVVFA, the Association was 39 years old. We are now in our 122nd year. Members like Ken Snavely built our Association. Their memories remain in our records and in our hearts. ... See MoreSee Less

A life well lived… a lifetime of service. Thank you, Sir. Rest in peace.

Thoughts and Prayers to his Family and Friends.

What an incredible life.

Under the leadership of CVVFA First Vice President David Lewis, Steve Austin and a team from the Cumberland Valley Volunteer Firemen’s Association’s Emergency Responder Safety Institute traveled to San Antonio Texas to attend the National Firefighter Life Safety Summit 2022, hosted by the National Fallen Firefighters Foundation and the San Antonio Fire Department. Each agency in attendance was invited to bring two emerging fire service leaders to the conference. We brought Josh Pfeiffer and Brady Robinette who have embraced Responder Safety and Traffic Incident Management and are rising stars in the CVVFA. Work centered around developing strategies to reduce firefighter deaths and injuries. CVVFA/ERSI focuses on Life Safety Initiative # 11 Response Policies. The team brought the Responder Safety Message to the gathering. ... See MoreSee Less